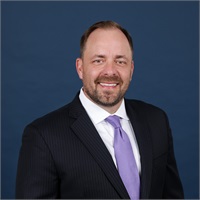 David is one of the founding members of Aileron Wealth Management. He began his financial career in 1999, after receiving a Bachelor’s degree in Finance from Stetson University, with a concentration in investments.

Prior to working in the financial industry, David was a top draft pick for the Pittsburgh Pirates. He played for both the Pirates and the California Angels before retiring from Major League Baseball in 1996. As a rookie player, David received a significant signing bonus—funds he was not prepared to manage. After retiring from his baseball career, he began to recognize the financial mistakes he had made and the bad advice he’d received. This drove him to study financial planning and investment management, so that he could provide others with the financial guidance he wished he’d received when he was younger.

David enjoys biking through the beautiful horse country of Eustis, Florida, where he lives with his wife, Danielle. He’s also a big fan of the Georgia Bulldogs, and you’ll frequently find him rooting them on in the fall. David is a former board member and active supporter of the Children’s Home Society.

David has received his Certified Financial Planner® (CFP) and Accredited Investment Fiduciary® (AIF)
designations. He also holds the FINRA Series 7 and 66 securities registrations, along with his Life, Health and Variable Annuity Insurance Licenses.